XRP Price Forecast 2023: Ripple gears up for a bright future if it wins legal battle with

Ripple’s cross-border settlement token XRP price has been on a roller coaster ride since the beginning of the Securities and Exchange Commission (SEC) vs Ripple lawsuit in December 2020. Payment giant Ripple made strides through several partnerships and developmental updates in its ecosystem, boosting XRP’s utility and driving the altcoin’s adoption. The outlook on XRP price remains bullish for 2023.

SEC v. Ripple lawsuit recap and what to expect in 2023

The latest update in the SEC v. Ripple lawsuit is that attorney Nicole Tatz, from Ripple CEO Brad Garlinghouse legal counsel, has applied to withdraw as the co-defendant’s counsel in the ongoing lawsuit.

Attorney Tatz submitted the motion to withdraw as counsel on December 16, saying that other lawyers at the US law firm Cleary Gottlieb Steen & Hamilton LLP will “continue to be counsel of record for Bradley Garlinghouse in this action.” The attorney made it clear that she would no longer be associated with the law firm, starting December 31. 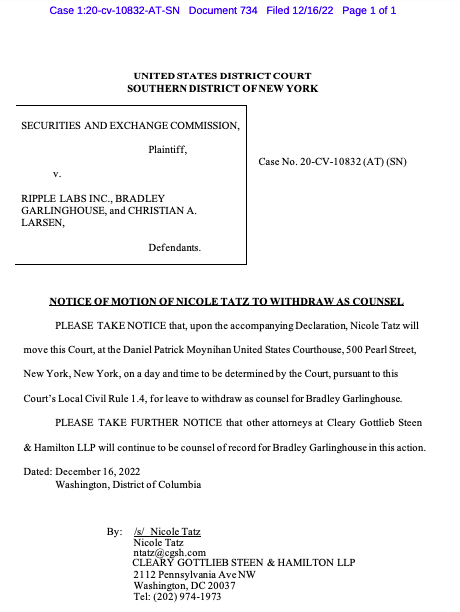 Nicole Tatz’s motion to withdraw as attorney of Brad Garlinghouse

The United States financial regulator brought charges against cross-border payment settlement firm Ripple and its executives in December 2020. The US Securities and Exchange Commission alleged that Ripple and its executives’ sale of the XRP token constituted an offering of “unregistered securities” worth over $1.38 billion. Ripple’s executive chairman Chris Larsen and CEO Brad Garlinhouse were listed as co-defendants. 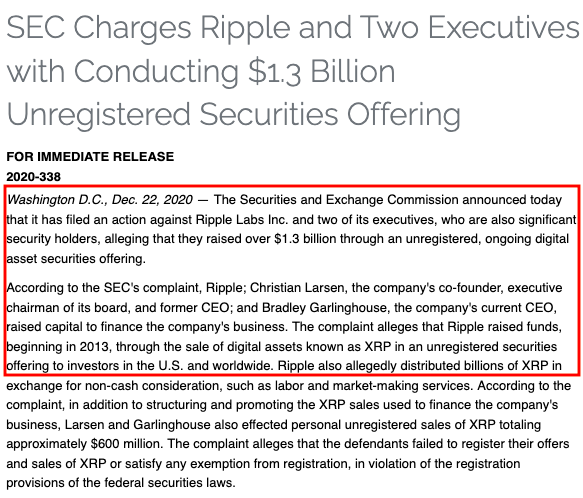 The following infographic sheds light on the timeline of creation of the third-largest altcoin by market capitalization, XRP. It reveals the interconnectedness of XRP sale with executives named in the lawsuit and reasons why the US SEC filed legal action against the payment giant.

Ripple’s creation and sale by OpenCoin and executives

The nature of the SEC charges against Ripple become clearer when looking at the period from 2013 to December 2019. The United States financial regulator’s lawsuit garnered the attention of leading cryptocurrency exchanges and, as a consequence, the XRP token was delisted by Coinbase, Kraken and Binance US among other platforms. In January of 2021, a total of 26 crypto trading platforms, market makers, and trading firms had delisted XRP as the altcoin’s price nosedived after news of the SEC v. Ripple lawsuit.

The SEC’s case against Ripple stands on the grounds that XRP is a security according to the Howey Test.

The US Securities and Exchange Commission charged Ripple claiming that the cross-border remittance firm and its executives engaged in the sale of a security: XRP. A security is a traded financial instrument representing ownership in a corporation or similar entity but has no utility. Since XRP tokens were used to fund Ripple’s platform Ripple Labs Inc, formerly OpenCoin, the SEC considered it a security.

The following is the legal definition of a security:

The United States SEC v. Howey, a landmark Supreme Court case in 1946 aids in determining whether a transaction falls within the Securities Act of 1933’s definition of an investment contract.

According to the Howey test, the investor’s control over the profit is a key factor in determining whether or not an investment contract is a security. It is typically considered a security if the investors have no influence over the asset.

Did XRP meet the requirements of the Howey Test?

The US financial regulator requires securities to be registered with it and financial information to be publicly reported. The purpose is to protect investors’ interests while combating fraud. The SEC determined that XRP satisfied the Howey test’s requirements because:

Based on the points stated above, the US SEC believes that XRP is a security and passes the Howey Test. 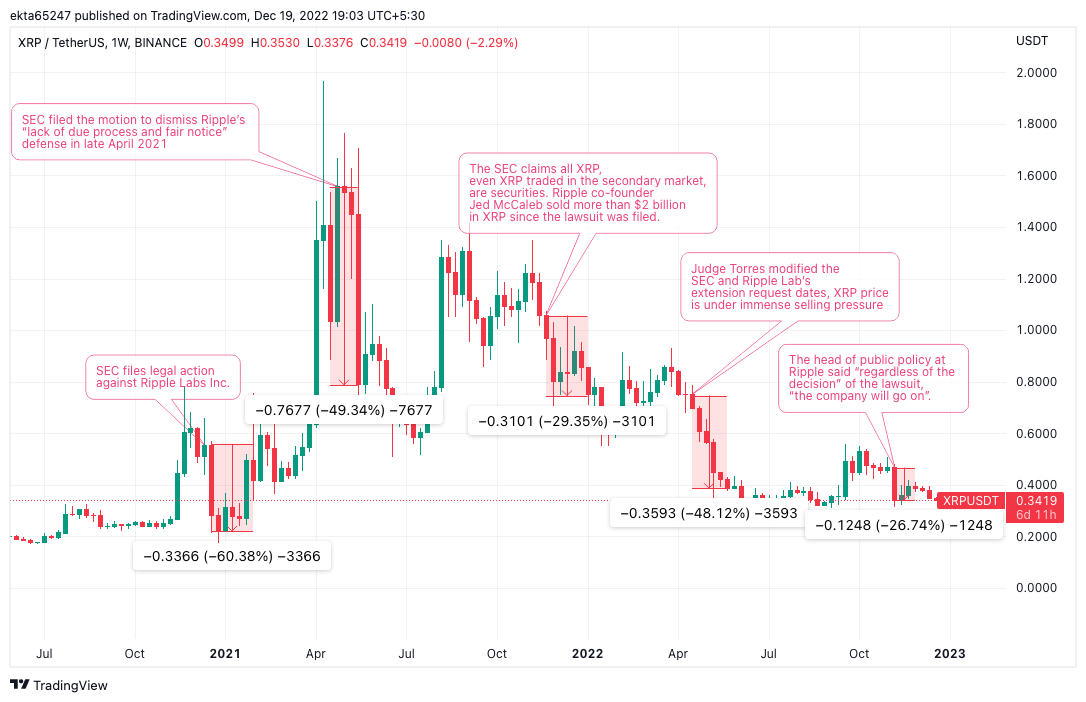 Experts predict a positive outcome of the lawsuit for Ripple

The final verdict in the ongoing SEC v. Ripple lawsuit is undoubtedly the most highly anticipated in the crypto ecosystem. Experts predict significant movement in XRP price with a positive outcome in the court case.

Roslyn Layton authored a controversial post in Forbes in August 2022 pointing out that since 2017, the SEC’s Crypto Assets Unit has been involved in 200-odd lawsuits. Layton believes that this figure suggests that instead of coming up with clear crypto regulation to ensure compliance, the regulator would rather engage crypto firms with lawsuits and “regulate by enforcement.”

January Walker, a US politician and congressional candidate, recently highlighted the importance of Ripple potentially defeating the United States Securities and Exchange Commission in the ongoing litigation. Walker argues that a settlement would spell a loss for the Web3 ecosystem.

Walker is known for her advocacy in favor of blockchain and cryptocurrencies. The politician and pro-crypto congressional candidate voiced her support for Ripple as the payment giant is embroiled in its legal tussle with the US financial regulator.

If Ripple settles it will be a loss for the whole world & WEB3.

Ripple partnerships and developmental progress over 2022

Ripple published its quarterly XRP Markets Report to voluntarily provide transparency and regular updates on the company’s views on relevant XRP-related announcements and commentary on market developments over the previous quarter.

New and existing partners announced their use of ODL for treasury flows, including FOMO Pay, a Singapore-based institutional digital payment solution provider, and iRemit, one of the largest non-bank remittance service providers in the Philippines.

XRPL’s interchain operability expanded in Q3 as Poly Network integrated XRPL into its cross chain bridging system. This is the third large scale bridge to add XRP Ledger after both Allbridge and Multichain integrated it in early 2022.

The remittance firm unveiled a partnership with FLUF World, an NFT player with an active community of over 100,000 members, to build Root Network. The blockchain network was integrated into the XRP Ledger and XRP was used as the gas token. 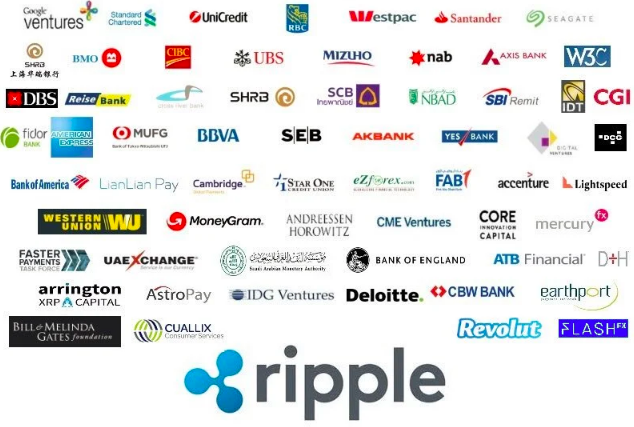 List of Ripple’s partners as of August 2022, not exhaustive

The XRP Ledger saw key cross-bridge integrations with Multichain and Allbridge, both of which allowed XRP holders to move their XRP to 12 different blockchains, including Avalanche, Fantom and Solana, as well as move the top coins from these chains onto the XRP Ledger. This was a key milestone for XRP traders as it boosted the interoperability of the token.

Find an exhaustive list of all firms in the XRP ecosystem here.

XRP holders consider the $1 level a key psychological level for the altcoin. The third-largest altcoin by market capitalization has kept within a falling wedge throughout 2022. XRP price touched the trend lines more than five times making it a validate chart pattern.

The falling wedge is a chart pattern that occurs when the asset’s price is moving in an overall bullish trend before it corrects lower. The consolidation part typically ends when price action bursts through the upper trend line or the wedge’s resistance. 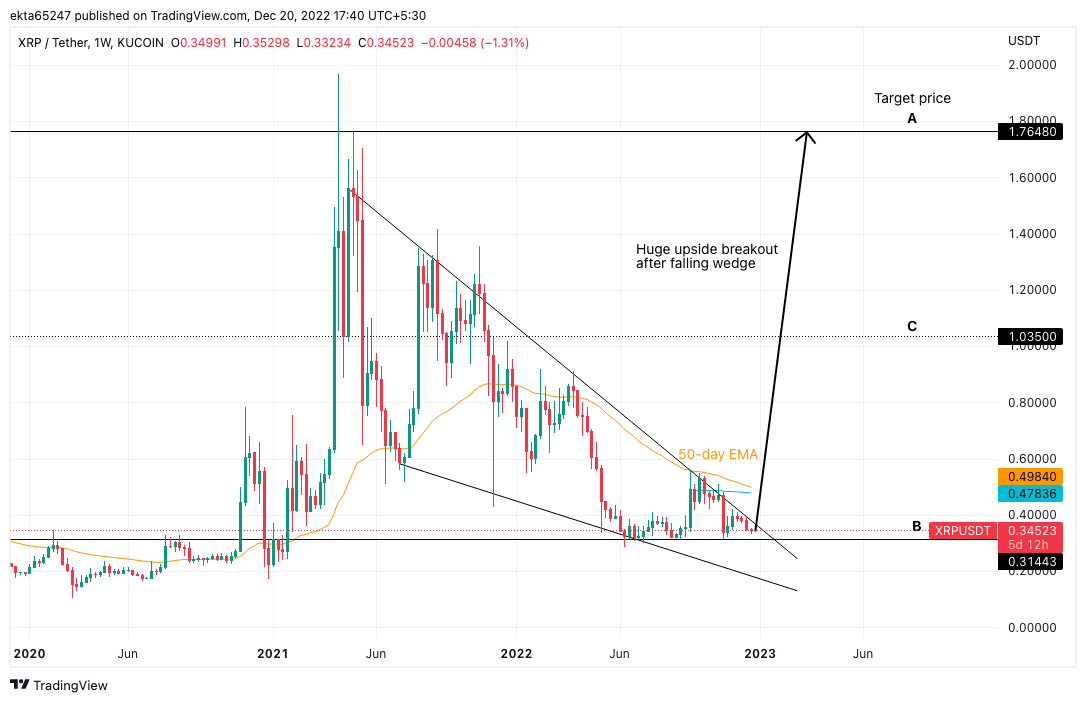 As seen in the XRP/USDT 1W chart above, XRP price is currently pressing up against the top of the falling wedge and a decisive close above the upper trend line could signal a breakout and the possible start of a new uptrend.

The 50-day Exponential Moving Average (50-day EMA) is acting as resistance at $0.498290 and the target for the breakout from the falling wedge is $1.764800. While a breakout from a falling wedge can be in either direction, patternsite.com explains it is upward 68% of the time. Once XRP price closes outside either of the trendlines, a breakout will be confirmed. For bullish breakouts, the highest peak in the pattern – in XRP’s case the $1.764800 level – is the price target.

Bullish developments like a positive outcome in the SEC v. Ripple court case and a growing number of partnerships and developmental updates could trigger a breakout in XRP Ledger’s native token.

Altcoins Surge in a Sea of Green – Could There Be a Catch?…

Ethereum price needs to overcome this obstacle to resume ETH…

Read More: XRP Price Forecast 2023: Ripple gears up for a bright future if it wins legal battle with

Is Block Stock a Buy Now? | The Motley Fool