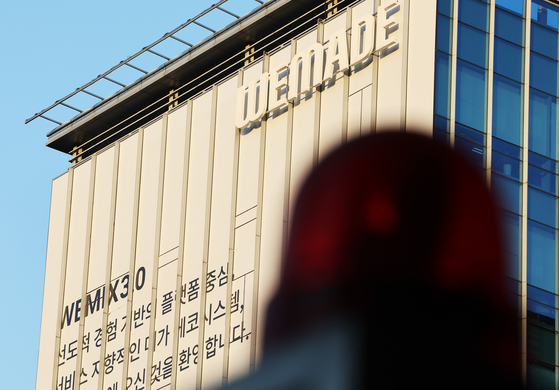 A picture of Wemade’s headquarters in Seongnam, Gyeonggi, on Dec. 8 [YONHAP]


Wemix tokens and the company behind them rallied Friday after a Korean crypto exchange started allowing trade in the coins, which have been shunned by a coven of competing exchanges.

The coin was also helped along by a number of moves by Wemade, the company that created Wemix, to shore up the battered crypto, efforts by service providers to improve the credibility of the coins and some encouraging comments from the crypto business.

“Wemix will make up for lost time,” the company said in a statement.

“We decided to list Wemix because there are over 100,000 investors, and companies listed on the stock market are also involved,” said Ash Han, CEO of Peertec, which owns GDAC. “We concluded that there needs to be a market to ensure that these investors get at least a minimum level of support and a trading system for their protection.”

Han defended Wemix as “a rare blockchain project in Korea” and argued that there need to be more similar projects in the future. “I hope that the Wemix incident helps bring up the standard of the virtual asset market.”

Wemade shares rose 8.5 percent on Friday following the news, closing at 32,850 won ($25). The price of Wemix tokens jumped by 90 percent to 360 won as of Friday afternoon, according to CoinMarketCap.

The game and crypto publisher promised to continue efforts to maintain its blockchain projects despite a boycott by major Korean crypto exchanges.

The company will buy back and burn $10 million of Wemix by March 8 next year in order to protect the value of the tokens amid headwinds, according to a notice posted Friday. Wemade will raise capital, sell assets and take out loans to finance the buyback.

Binance agreed on Dec. 4 to act as custodian for Wemix tokens and CrossAngle, a local blockchain information company, will provide real-time monitoring for the tokens.

“The Foundation will adopt and implement the Wemix deflationary policy, where reduction of the total supply will also impact the value of Wemix while incentivizing our community and investors as the ecosystem grows,” the company said in the notice.

Havoc is turning into a teaching moment for other game companies that also issue virtual assets.

Com2uS, which issues the C2X cryptocurrency, said it will publish compliance reports that include the number of coins distributed in the market and other information important to investors through XPLA, a blockchain mainnet.

The company will post regular reports and any change in the number of coins if there is more than a 0.1 percent change in the total, and it will do so before the change takes place. The notice will be put up on blockchain market trackers such as Xangle and CoinMarketCap.

Netmarble, which issues MBX, and Kakao Games, which issues Bora coins, said they are regularly posting data on blockchain trackers and will continue to do so.

Who Is the Crypto Baroness Michelle Mone?