Disclaimer: The datasets shared in the following article have been compiled from a set of online resources and do not reflect AMBCrypto’s own research on the subject

Since the beginning of 2022, VeChain’s native token VET has been on a steady downtrend. The panic and uncertainty following the crypto-contagion triggered by Terra’s collapse in May pushed the altcoin below $0.037 – A price that VET hasn’t been able to reclaim since.

Binance, the world’s largest crypto exchange, announced on 15 November that it will support VeChain’s network upgrade and hard fork that is slated for 17 November. VET deposits and withdrawals will be suspended for the same on 17 November until the network is deemed stable for operations.

VeChain had recently announced a partnership with Nitto ATP Finals 2022, a tennis tour. The blockchain firm has ramped up its PR efforts for the same and is currently running a massive marketing campaign for the season ending event.

VeChain is a flexible enterprise-grade L1 smart contract platform. VeChain started out in 2015 as a private consortium chain, collaborating with a variety of businesses to investigate blockchain applications. It helps companies to create decentralized applications (dApps) and carry out transactions with higher levels of security and transparency.

VET’s massive rally on 8 November was triggered by an announcement by the VeChain Foundation. The firm announced VeChainThor’s most significant mainnet hard fork ready for deployment following the successful vote on VIP-220 dubbed the ‘Finality with one Bit’.  This milestone upgrade will bring the final phase of VeChain’s proof of authority 2.0 and is expected to take place on 17 November.

VeChain was actively involved in UFC 280 which took place on 22 October, as part of its $100 million multi-year deal with UFC which was announced earlier this year in June.

The sustainability-centric blockchain is currently mulling over a significant Proof of Authority upgrade which will integrate VIP-220 with the VeChain Thor Mainnet.

If approved by all stakeholders’ votes, VeChain will gain finality and bring an end to the trade-off that is choosing between scalability with high throughput or instant finality. The VeChain Foundation stated earlier that this upgrade will make it the “perfect real-world blockchain”

VET investors who were disappointed with a three-month return of -11.5% on their tokens finally got some good news when Binance U.S. revealed that VeChain customers could stake their VET and earn 1% APY rewards  in VeThor Tokens (VTHO)

DNV GL, a provider of audit and certification services for ships and offshore structures, partnered with VeChain in January 2018 to provide audits, data collecting, and a digital assurance solution for the food and beverage sector.

Apart from this, PriceWaterhouseCoopers (PwC), a large auditing and consulting business, has teamed up with VeChain since May 2017 to provide its clients with greater product verification and traceability.

Additionally, starting in April 2020, VeChain has been used by H&M, the Luxury Fashion Brand, the second-largest clothes retailer in the world with more than 5000 stores.

However, things are not turning around so well for the token. The price of VeChain dropped to its lowest level in the last twelve months with the outbreak of the Russia-Ukraine 2022 war. As is common with cryptocurrencies, it began to recover the very next day. Many traders are now unsure if it would be wise to invest in this currency at this time as a result of this.

If this applies to you, you might want to find out more information before deciding whether or not to purchase it.

If this trend persists, VeChain might easily reach $1 within the next few years or even more. Anything might happen in the cryptocurrency market, so this is by no means a guarantee. However, VeChain appears to be positioned for long-term growth, and $1 seems like a reachable goal in the foreseeable future. 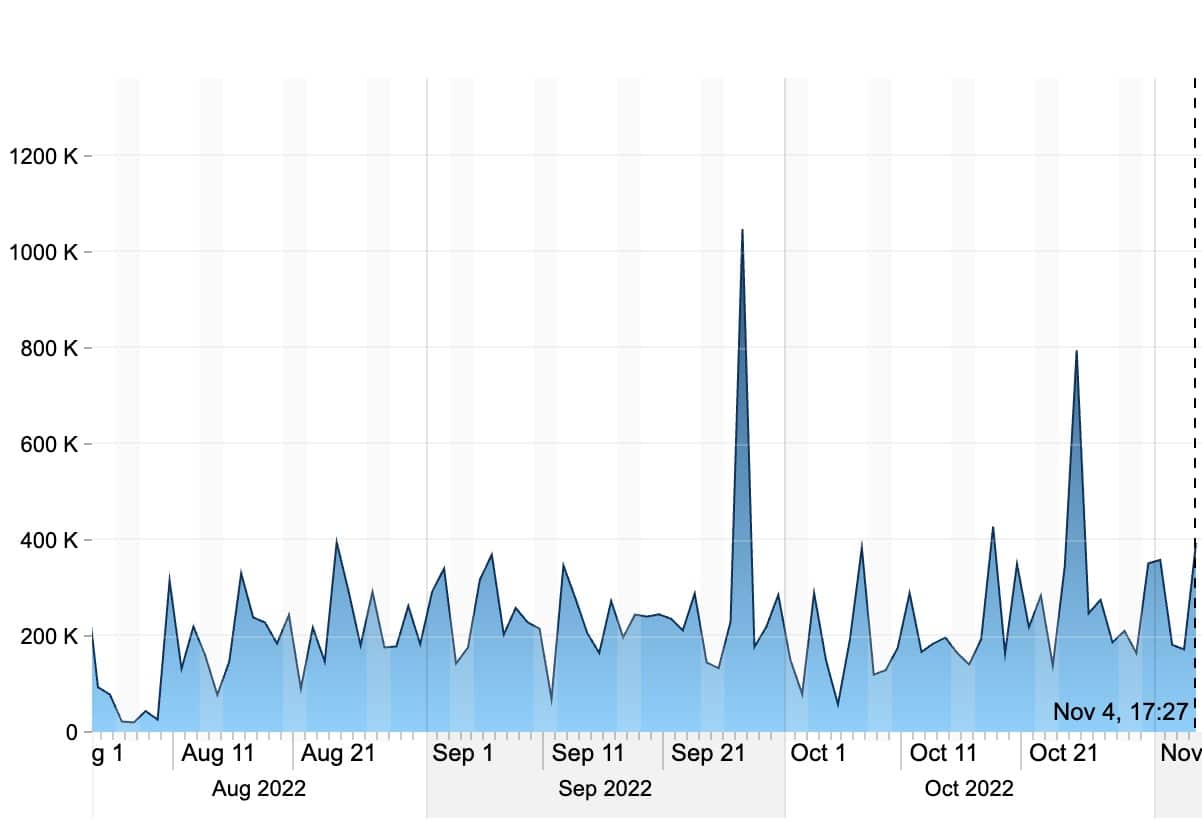 In fact, data from VeChain Stats revealed a troubling decline in its mainnet activity.

Although there has been a visible spike in activity since the beginning of August, one cannot ignore the difference compared to last year when the network was seeing over 2 million clauses a week. Unlike many other cryptocurrencies, VeChain’s price and its mainnet activity started declining at the beginning of 2022. The market-wide sell-off following the collapse of Terra did impact VeChain’s mainnet activity, but as the chart indicates, it has pretty much recovered to pre-bear market levels.

Additionally, data procured by SeeVeChain suggested that VeChain Thor transactions have been on a steady decline too. The daily burn rate of VETHO, the token required for facilitating VET transactions, can be seen consistently falling – A sign of diminishing VET transactions.

However, since the beginning of August, the daily burn rate has been setting higher highs, while moving in a sideways direction. This may suggest recovery and stabilization to some extent.

VeChain was in the news back in May 2022, when it offered Terra LUNA developers grants of upto $30,000 to migrate their layer 1 chains to VeChain following the collapse of terra.

There was a brief rebound in VET’s price towards the end of the first quarter of 2022. The token surged all the way to $0.089 following the announcement of VeChain’s partnership with Draper University which entailed a fellowship and a Web3 accelerator program. However, May’s market-wide crash sent VET’s price tumbling down to $0.024. The price failed to recover from the bearish trend, despite news of a new partnership with Amazon Web Services and the Q1 financial report from the VeChain Foundation which showed a healthy balance sheet.

In 2020, PwC estimated that blockchain technologies could boost the global GDP by $1.76 trillion by 2030 through improved tracking and tracing. PwC’s economic analysis and industry research showed that tracking and tracing products and services has an economic potential of $962 billion. Investors will be eager to see how PwC’s blockchain partner VeChain benefits from this.

Global market intelligence firm IDC released a report in 2020. According to the same, 10% of the supply chain transactions in Chinese markets will use blockchain by 2025. This could work out in favor of VeChain, with it being the leading blockchain firm catering to supply chain solutions and given its significant presence in China. James Wester, research director at Worldwide Blockchain Strategies IDC noted,

“This is an important time in the blockchain market as enterprises across markets and industries continue to increase their investment in the technology. The pandemic highlighted the need for more resilient, more transparent supply chains”

It was reported in July that VeChain will be rolling out a solution for luxury brands that often find their cheap knock-offs being illegally sold in the primary and secondary markets.

VeChain will implant its proprietary chipset in luxury products which will help manufacturers keep track of their inventory and monitor sales in real-time on the blockchain. In addition to that, customers will be able to verify the authenticity of their purchased product using a mobile application. The application would also provide additional info such as carbon emissions associated with their purchase and the story behind their product.

A paper published by The Institution of Engineering and Technology outlined blockchain applications for the healthcare industry. The paper explained how start-up companies in this industry were exploring the use of blockchain technology for clinical data management. The paper went on to cite the example of the Mediterranean Hospital in Cyprus, which leveraged E-HCert, a data management application based on VeChain Thor.

On 10 August, VeChain and OrionOne, a global logistics tech firm, announced an integration partnership. The joint venture aims to combine the VeChain ToolChain with Orion’s best-in-class logistics platform to offer clients an efficient and effective pathway to leverage blockchain technology in their business without spending a ton on network infrastructure. Tommy Stephenson, CEO of OrionOne, while speaking on this new partnership remarked, “When it comes to blockchain and supply chain, there’s only one game in town, and that’s VeChain. No other entity can compete with their low-cost, rapid deployment, and ease of use.”

On 19 August, the VeChain Foundation announced via Twitter that the VeChainThor public testnet had been successfully updated to accommodate VIP-220, also known as the Finality with One Bit (FOB). The update implements a finality gadget that allows the network to run dual modes of consensus, the Nakamoto and Byzantine Fault Tolerance (BFT) consensus, at the same time. This move saved VeChain the trouble of completely replacing its proof-of-authority consensus mechanism. A finality gadget helps blockchains execute transactions optimistically and only commit them after they have been sufficiently validated.

Developers have clarified that FOB has an edge over the existing finality gadgets which follow the view-based model of Byzantine Fault Tolerance (BFT) Algorithms because nodes in FOB are less likely to be affected by network failure.

The update will also help VeChain reduce the complexity of its current proof-of-work consensus protocol, thus minimizing the potential risks caused by unknown implementation bugs, in addition to sustaining the usability and robustness of the network.

Earlier in June, VeChain had described block finality as “an indispensable property for a modern blockchain system because it provides an absolute security guarantee for blocks that satisfy certain conditions.”

The VeChain Foundation informed its community on Twitter that from 5 September onwards, the network will be suspending $VEN TO $VET token swaps. The function is expected to resume after the…