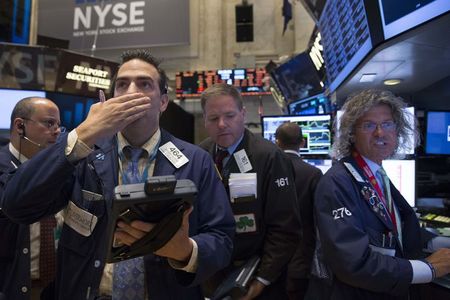 Investing.com — The Dow extended losses Monday, falling for the fourth-straight day as rising Treasury yields continued to keep tech in the firing line amid ongoing worries about a Federal Reserve-fueled recession.

The European Union charged Meta with antitrust violations for limiting competition in the markets for online classified ads. If found guilty, Meta faces a fine of up to $11.8 billion.

Alphabet Inc (NASDAQ:), Apple Inc (NASDAQ:) and Microsoft Corporation (NASDAQ:) were down more than 1% adding to their losses from a week earlier.

Consumer discretionary was dragged lower by casino and travel stocks as China faces a fresh wave of COVID after recently abandoning its zero-COVID policy and lifting restrictions.

Tesla (NASDAQ:), meanwhile, turned negative to end the flat amid expectations that Elon Musk would step down from Twitter, paving the way for more focus on Tesla.

Twitter users voted in a poll for Elon Musk to step down as chief executive of Twitter. Ahead of the results of the poll, Musk pledged to honor the result of the poll.

“With the poll closing this morning, it appears Musk’s reign as CEO of Twitter will come to end and thus be a major positive for Tesla’s stock starting to slowly remove this albatross from the story,” Wedbush said in a note.

Disney (NYSE:), a major Dow component, fell nearly 5% after its “Avatar: The Way of the Water” took in $134M in sales at the domestic box office during its opening weekend, missing expectations for a range of $135M to $150M.

In crypto-related news, Coinbase Global (NASDAQ:) plunged to fresh 52-week lows as fallout from the FTX bankruptcy continues to keep crypto under pressure.

Legal fight over ownership of Web3 heats up