Stablecoins, a class of digitial asset touted as being more constant in their value than other cybercurrencies, have become increasingly popular in recent years. But recent market declines in the past couple of months have turned the spotlight on the quality of the assets backing the values of stablecoins. The quality of major stablecoin providers’ financial reporting has also been questioned, especially in light of regulatory scrutiny and enforcement actions.

On June 27, 2022, SEC Chair Gary Gensler expressed concerns over crypto and stablecoin disclosures and the need for enhanced regulatory protection for investors (CNBC, SEC Chair Gary Gensler discusses potential crypto regulation and stablecoins, June 27, 2022, https://cnb.cx/3PJBCjn). The lack of adequate authoritative guidance for the accounting and disclosure of crypto and stablecoin transactions has led to fundamental problems in the consistency, comparability, and representational faithfulness of financial reports. Critical accounting procedures (e.g., segregation of funds, timely reviews, third-party verification) are very much the exception. The quality and quantity of assets backing stablecoins remain an open question.

The summer of 2022 saw the price collapse of the then–third-largest stablecoin TerraUSD (Vicky Ge Huang, “Tether Cedes Territory to Rival Stablecoins as Crypto Investors Diversify,” WSJ, June 9, 2022, https://on.wsj.com/3zmjJBN). The crypto asset class has fallen 67%, from a total market capitalization of around $3 trillion in November 2021 to under $1 trillion as of June 2022 (Paul Vigna, “Bitcoin Price Dips Below $21,000 as Crypto Firms Announce Layoffs,” WSJ, June 14, 2022, https://on.wsj.com/3v1DbkQ). Bitcoin, the largest and likely oldest crypto asset, lost 70% of its value in this same period (from approximately $68,000 to $20,000 per unit). As of June 2022, the number of crypto bankruptcies was growing (Three Arrows Capital, Celsius Holdings, Voyager Digital) and counterparties in the crypto field have been under increasing stress (“Crypto bankruptcies spread through digital asset landscape as cheap money dries up,” CNBC, July 15, 2022, https://cnb.cx/3cx4f5c).

This article examines the growth of stablecoins and the multitude of underlying accounting, governance, and regulatory issues they present. We will focus on U.S. regulatory concerns, while addressing the need for coordinated international regulation. Although the U.S. government’s oversight of stablecoins currently has regulatory gaps, as described in the President’s Working Group on Financial Markets (PWG) Report, there is increasing U.S. and international regulatory scrutiny of this new asset class. Those investing in stablecoins can lack basic investment protections and disclosures that investors expect, especially in the United States.

In November 2021, the PWG, the Federal Deposit Insurance Corporation (FDIC), and the Office of the Comptroller of the Currency (OCC) issued their Report on Stablecoins, which stated the following:

Stablecoins are digital assets that are designed to maintain a stable value relative to a national currency or other reference assets. Today, stablecoins are primarily used in the United States to facilitate trading, lending, or borrowing of other digital assets, predominantly on or through digital asset trading platforms. (https://bit.ly/3PuBBQS)

In response to the release of the PWG Report, U.S. Treasury Secretary Janet L. Yellen expressed her concerns over the current regulatory oversight system:

Stablecoins that are well-designed and subject to appropriate oversight have the potential to support beneficial payments options. But the absence of appropriate oversight presents risks to users and the broader system. Current oversight is inconsistent and fragmented, with some stablecoins effectively falling outside the regulatory perimeter. (https://bit.ly/3PM300o)

The 2021 PWG Report noted that “Congressional action is urgently needed” in these areas and that regulators need to take steps that will increase investor protection, ensure market integrity, and address illicit finance concerns. The PWC Report called for Congress to “act promptly to enact legislation to ensure that payment stablecoins and payment stablecoin arrangements are subject to a federal prudential framework on a consistent and comprehensive basis.”

Stablecoins are often marketed and sold on the premise that they maintain a fixed value and are fully backed by underlying assets (e.g., 1 coin equals $1). They are a primary means to settle trades in the virtual currency domain and facilitate transactions using different fiat currencies (e.g., U.S. dollars, euros, British pounds, yen). They facilitate virtual currency exchanges that often face significant banking restrictions.

The growth of stablecoins is an ongoing concern to U.S. government officials, with regulators openly questioning their financial stability and veracity of their disclosures.

The PWG Report observed that many stablecoins offer the promise or expectation that they can be readily redeemed at par value. Stablecoins are often categorized as such because they are supported by reserve assets. The quality of reserve assets varies by the particular stablecoin and ranges from higher-quality U.S. Treasury bills to riskier commercial, corporate, and municipal assets, even including other digital assets or some combination. In the case of TerraUSD’s stablecoin collapse, it was not directly backed by a reserve, but by an algorithmic link to Luna, its “sister token” (Paul Vigna, “Cryptocurrency TerraUSD Falls to 11 Cents, Creator Announces Rescue Plan,” WSJ, May 16, 2022, https://on.wsj.com/3Otjs4m). Another inconsistency with stablecoins revolves around redemption rights. They vary from minimum redemption amounts, up to seven-day postponements, suspensions, to no direct right of redemption. In contrast, U.S. demand deposits that are federally insured (typically up to $250,000) are subject to regulatory supervision and regulations that protect depositors.

Exhibit 1 lists the largest stablecoins by total market capitalization as of July 16, 2022. It is clear by their trading symbols that many stablecoins are geared to the U.S. dollar (e.g., USDT, USDC, BUSD). The largest stablecoin is Tether, issued by Tether Limited, a Hong Kong–based company controlled by Bitfinex. In 2021, Tether entered into settlement agreements with the Commodity Futures Trading Commission (CFTC) for $41 million and with the Attorney General of the State of New York (NYAG) for $18.5 million regarding the misleading claims that each Tether token was backed by $1 U.S. (https://on.ny.gov/3B8XHDX). Tether’s staggering growth has continued mostly unabated despite the settlements. From January 2020 to January 2022, Tether’s total value grew from $4.1 billion (James Mackintosh, “Tether Sheds Light, but Not Enough, on Its $63 Billion Reserves,” WSJ, August 12, 2021, https://on.wsj.com/3v7OesV) to $78 billion. As of July 16, 2022, Tether was valued at $66 billion. The timeline of events leading to Tether’s NYAG settlement agreement, presented in Exhibit 2, reveals troubling accounting safeguards. 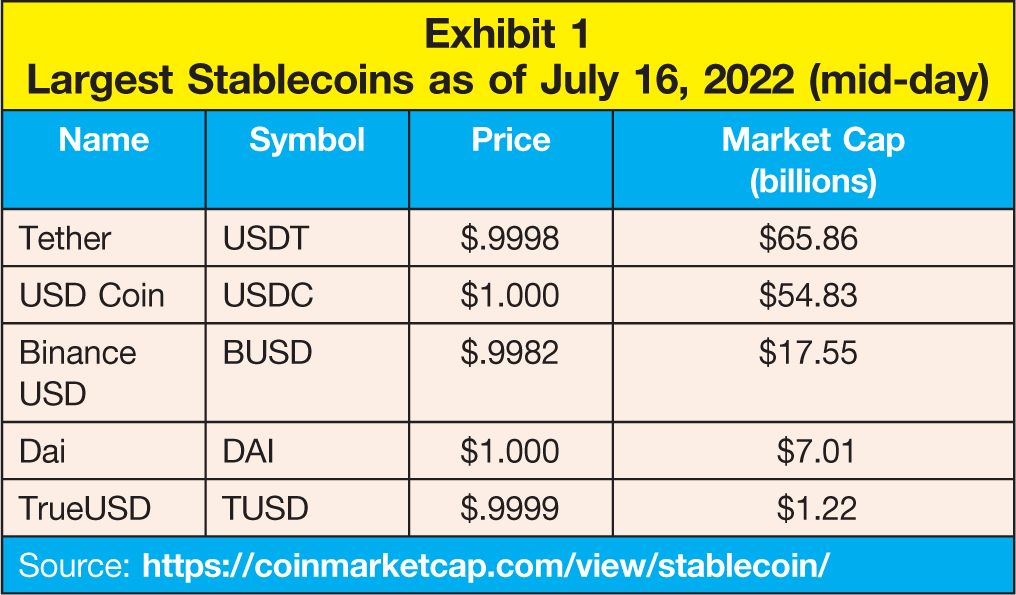 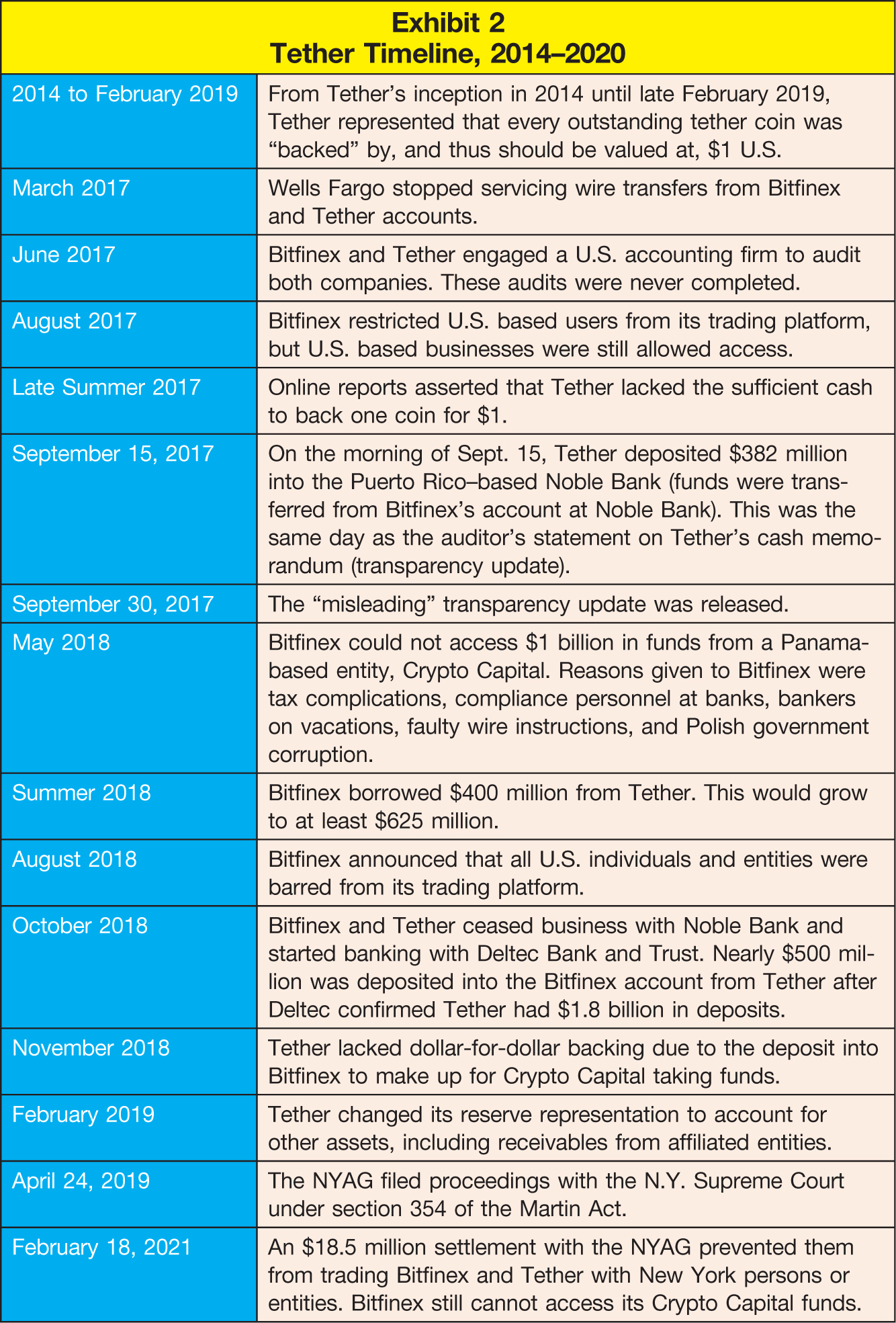 The growth of stablecoins is an ongoing concern to U.S. government officials, with regulators openly questioning their financial stability and veracity of their disclosures. As SEC Chairman Gensler told Congress in May 2021:

Tokens currently on the market that are securities may be offered, sold, and traded in non-compliance with the federal securities laws. Furthermore, none of the exchanges trading crypto tokens has registered yet as an exchange with the SEC. Altogether, this has led to substantially less investor protection than in our traditional securities markets, and to correspondingly greater opportunities for fraud and manipulation. (https://bit.ly/3czvtYY)

In July 2021, Treasury Secretary Yellen, in convening the PWG on stablecoins, observed, “Bringing together regulators will enable us to assess the potential benefits of stablecoins while mitigating risks they could pose to users, markets, or the financial system.” In August 2021, SEC Chair Gensler raised concerns that stablecoins “sidestep a host of public policy goals” and are potentially subject to SEC oversight as a security. In his testimony, Gensler specifically highlighted four major areas of concern:

Gensler sees crypto as not having enough investor protections and likened the crypto environment to the Wild West. In his view, stablecoins backed by securities “are subject to the securities laws and must work within our securities regime” (https://bit.ly/3PMiz84). Token-related cases involving fraud and investor harm are an SEC priority, and dozens of complaints have been brought against firms and individuals in this area. In an enforcement action (In the Matter of Poloniex,https://bit.ly/3RKMTBQ) against a trading platform that failed to register, the SEC noted that the coins exchanged on that platform were “investment contracts” and would be interpreted as securities under SEC v. Howey [328 U.S. 293 (1946)].

Concern exists government-wide. In June 2021, Boston Federal Reserve President Eric Rosengren stated: “There are many reasons to think that stable-coins—at least, many of the stable-coins—are not actually particularly stable” (Paul Vigna, “Risks of Crypto Stablecoins Attract Attention of Yellen, Fed and SEC,” WSJ, July 17, 2021, https://on.wsj.com/3cwAX6O). In a June 2021 presentation, Rosengren highlighted Tether as one of the “financial stability challenges” to the U.S. banking system (Marc Hochstein, “US Fed Official Calls Tether a ‘Challenge’ to Financial Stability,” Yahoo, May 25, 2021, https://yhoo.it/3z4Gw42). Uncharacteristically, the Federal Reverse President mentioned Tether…

Miami-Dade County, stuck in a 19-year contract with FTX, seeks to…

Belgium says BTC, ETH and other decentralized coins are not securities

IMF calls for tighter crypto regulation in Africa as the industry…

7 Cryptos You Can Still Count On Despite the Current Chaos