Bitcoin’s [BTC] almost 5% recovery on 14 October might not be the icing on the cake needed for a bullish revival. According to BaroVirtual, a CryptoQuant analyst, such events occurring in a full-blown bear market indicated a catastrophic outcome.

In his latest analysis, BaroVirtual pointed out that the BTC close/low ratio signaled that the rebound would eventually result in a price correction. 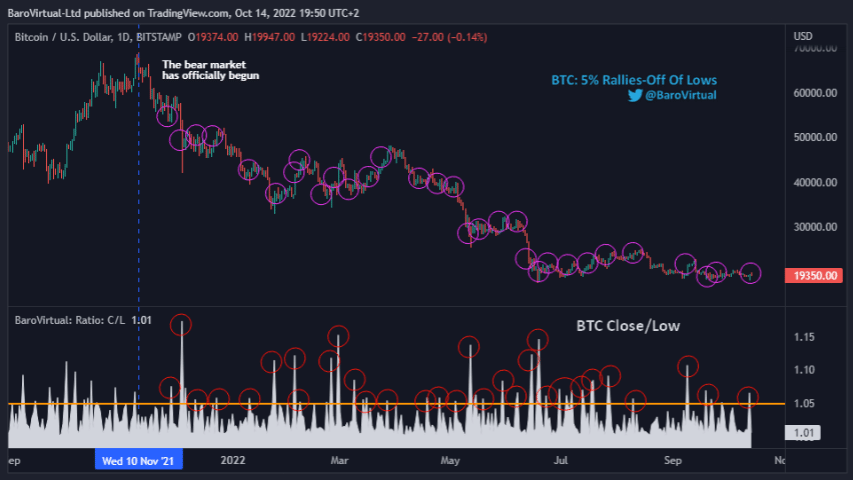 Interestingly, the analyst’s projection seemed quick to come to life. This was because it did not take long before Bitcoin succumbed to the bidding of bears. At the time of this writing, BTC was trading at $19,177— a 2.74% decrease in the last 24 hours. However, it did not look like the decline would end at 2% to 3%.

Based on the four-hour chart, BTC sellers had more edge over the strength of the buyers. The Directional Movement Index (DMI) showed that the positive part (green), which reflected the buyer edge was 16.77.

In contrast, the negative DMI (red) favored the sellers above the positive at 27.54. While bulls may have hoped that the directional strength was not strong enough, the Average Directional Index (ADX) proved otherwise. With the ADX (yellow) at 32.23, it was almost inevitable that BTC’s bearish momentum might last for a while before any bullish signs revealed themselves.

Hence, the defending zone from which BTC bulls may have expected a run might not be in the short term. 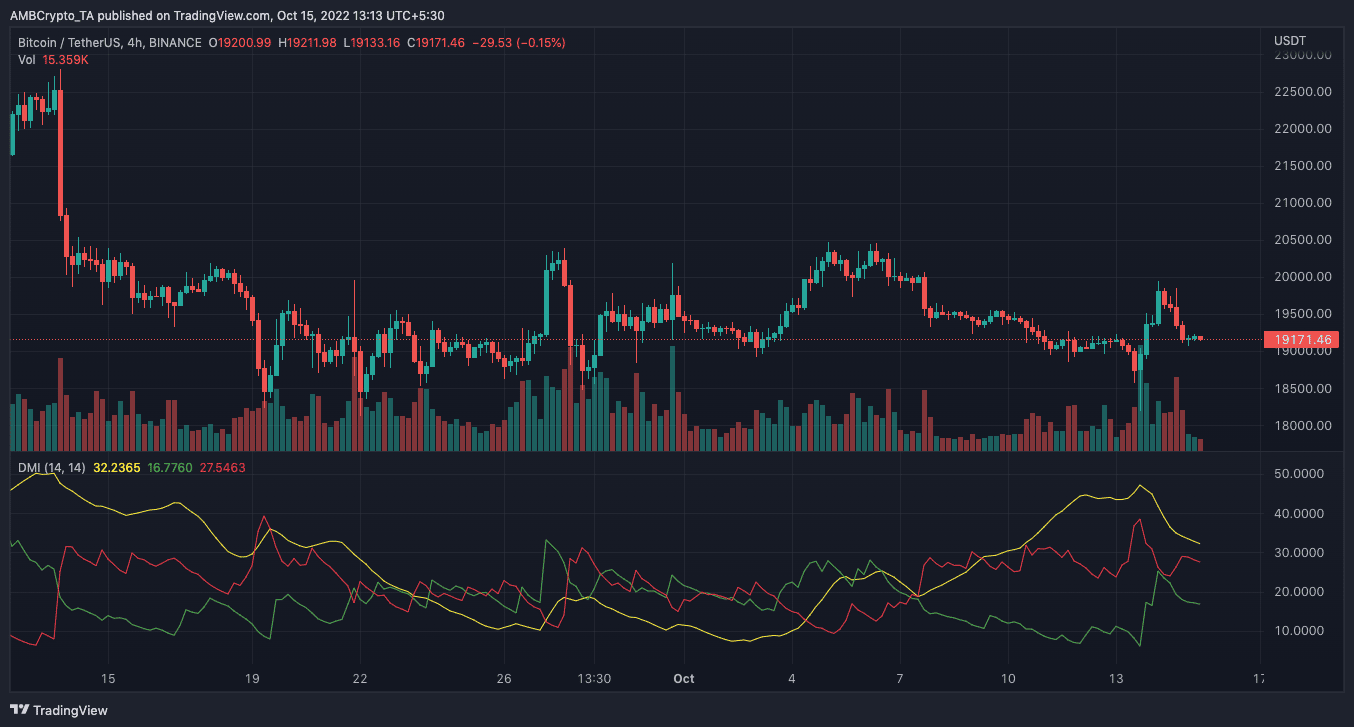 More so, BTC traders also seemed to have reduced centralized trading activities recently. According to on-chain data intelligence platform, Glassnode, the number of exchange deposits had reached new lows, with the latest a 1.836.483 within two years.

Because of this, it was less likely that investors would have taken profits. For others, it could mean it was time to evaluate their BTC portfolio.

What else is happening?

The current level was similar to what it has been since 15 September. The implication was that traders were looking to profit from the futures market since the BTC spot was less likely to produce significant gains. 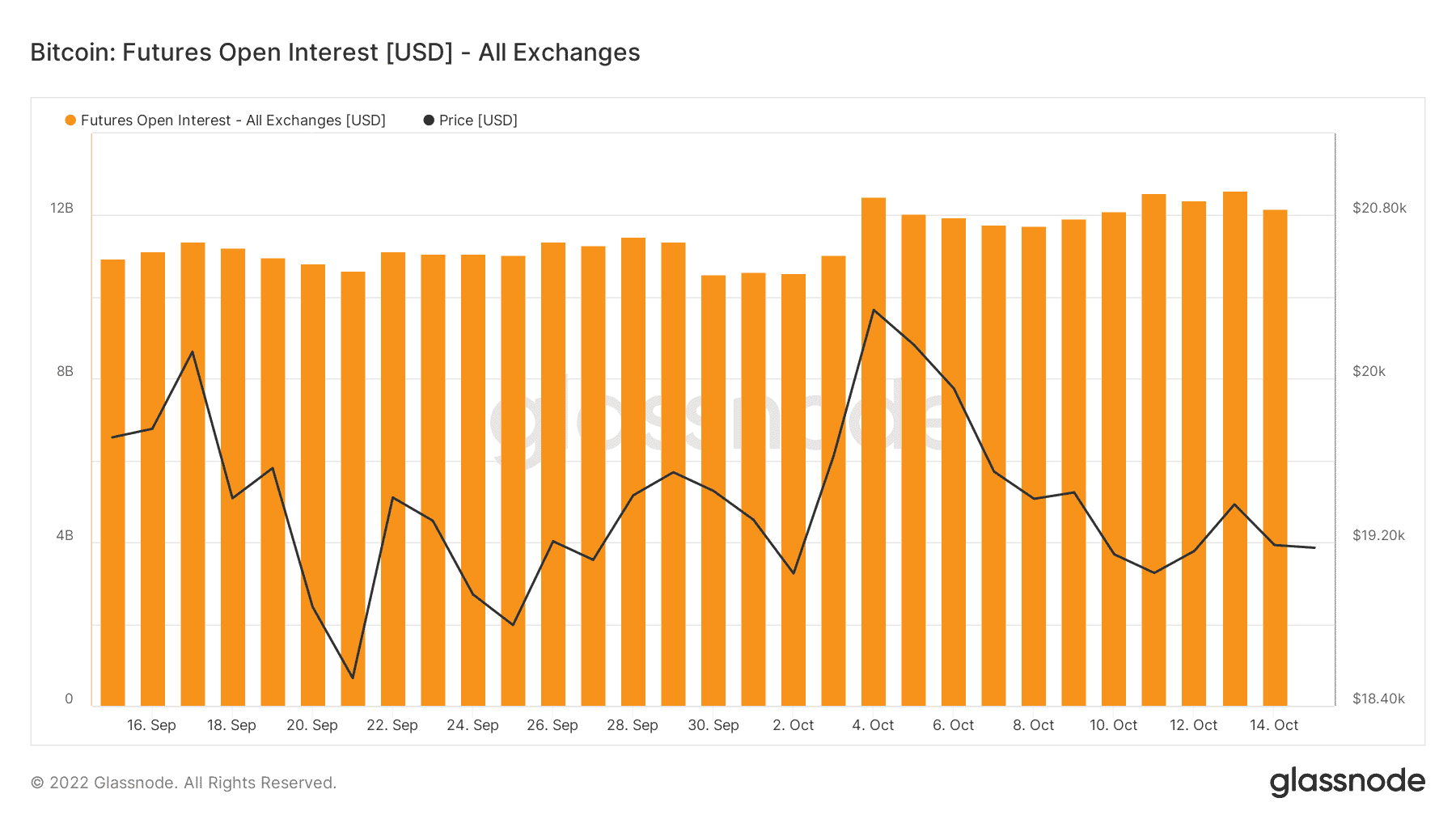 So, while there has been some selling pressure, there has also been a buying momentum to match. Hence, it was unclear who would win the Bitcoin momentum battle.


Read More: Bitcoin’s latest prediction-turned-reality can be an investor’s nightmare because…

Bitcoin News Nov 25, 2022 0
Following the collapse of FTX, multiple U.S. regulatory agencies have opened investigations into FTX and other…
Altcoin

Will crypto survive? Sadly, the FTX debacle is unlikely to be the last

How bad is the current state of crypto? On-chain analyst explains

$15.5K retest is more likely, according to Bitcoin futures and options

Can Businesses Benefit From Crypto? – MITechNews