The record open interest suggests is ready for a breakout, but the direction is unclear due to near-neutral rates.

The open interest in Bitcoin perpetual has increased to around 500k over the past week, reaching all-time highs relative to BTC’s market cap. The funding rate regime sits at near-neutral rates, implying that the growing leverage is caused by a balanced demand for both upside and downside exposure.

Therefore, while the market seems prepared for a squeeze, the breakout’s direction is unclear due to the near-neutral funding rates.

The open interest in Bitcoin perpetual increased from 428k to 498k over the past week, according to a recent report by crypto research and analysis firm Arcane. The report noted that the growing leverage is driven by a balanced demand for both upside and downside exposure, leading to near-neutral rates.

“In general, the market seems ripe for a squeeze, but assessing the direction based on funding rates provides little directional information. In this climate, it might be wise to avoid adding risk through leverage in the market.”

The report called the recent “parabolic,” claiming that it shows no signs of stopping. Notably, this trend is not new. The growing open interest in the market has been a trend since June this year and has only escalated more recently. The open interest has more than doubled in notional terms since mid-April.

Relative to market cap, the Bitcoin OI is at all-time highs. The report said this level of leverage is unusual in perpetual swaps history, noting that there have also been similar extremes in ETH derivatives. In fact, ETH’s OI is more extreme than that of BTC.

As open interest suggests, a breakout is imminent for Bitcoin. However, the breakout direction is unclear because of a balanced demand for both upside and downside exposure. Dylan LeClair, a senior analyst at UTXO Management, mentioned this in a recent tweet, saying:

“As bitcoin consolidates around $20,000, BTC-denominated futures open interest sits just below all-time highs at 604k BTC. Whether up or down, when bitcoin breaks out of its current range, it’ll likely be a violent move.” 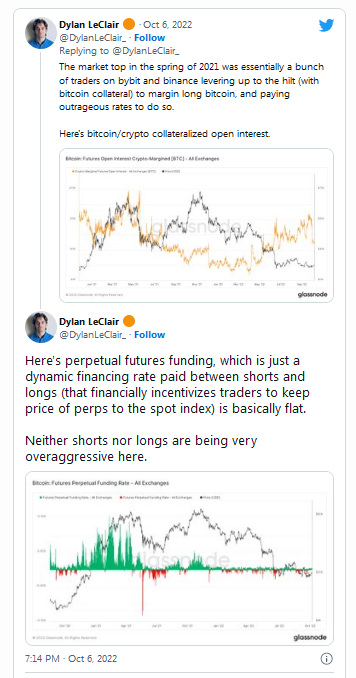 It is worth noting that the upcoming , which will set the stage for the Fed’s rate hike, might impact the direction of this breakout. A high CPI, accompanied by another 0.75% rate hike, might prove detrimental for Bitcoin and other risk assets since the dollar would become more attractive.

Bitcoin: This One Chart Is All You Need

Bitcoin News Nov 27, 2022 0
The year 2022 was a harsh one on the cryptocurrency market. Bitcoin prices sank from a high of around…
NFT

A US Senate hearing will discuss FTX, New York bans proof-of-work and…

The Curious Case of E-sports and Crypto

One Crypto Firm Poses Bigger Risk to Markets Than FTX, According to…

After More Than 380 Days, Crypto Supporters Celebrate Surviving the…