With Billions lost, FTX collapse has been profitable for this sector!

By Nidhi Bhardwaj: The recent fall of FTX noticed a spike in the number of crypto investors digging into hardware or “cold wallets” to ensure their holdings’ safety from external events as compared to “hot wallets.” Cold wallets, also known as “cold storage,” are a type of offline cryptocurrency storage that safeguard wallets against unauthorised attacks. And the FTX collapse gave way to the higher adoption of cold wallets for hardware wallet manufacturers like Ledger, which observed continuous profits in November.

And amid the FTX collapse, last week was the company’s biggest sales week ever

Along with Ledger, another hardware wallet provider, Trezor, also increased its sales by 300 percent.

Surge in the sales of Hardware Wallets

Josef Tetek, Trezor’s brand ambassador, revealed in a recent interview with Cointelegraph that the rise in sales of hardware wallets began after reports about FTX’s bankruptcy surfaced. “We anticipate this tendency to continue in the near to mid-term as the ripple effects of FTX failure continue to unravel and Bitcoin or cryptocurrency holders lose trust in custodians and eventually start to examine their options to self-custody their digital assets,” concluded Tetek.

According to information from Coinglass, exchanges now hold 9.4% fewer Bitcoins than they did on 10 November when they had a balance of 2.02 million coins; almost 1.83 million Bitcoins are in circulation right now. This indicates that 190,000 BTC, or $3.14 billion at the current Bitcoin price, departed the exchanges over the course of the previous seven days.

Since these digital wallets aren’t connected to the internet, they’re less susceptible to hacking, perhaps stimulating the interest of the Bitcoin, Ethereum, and Tether communities to use cold wallets in the aftermath of safety-related concerns following the FTX collapse. 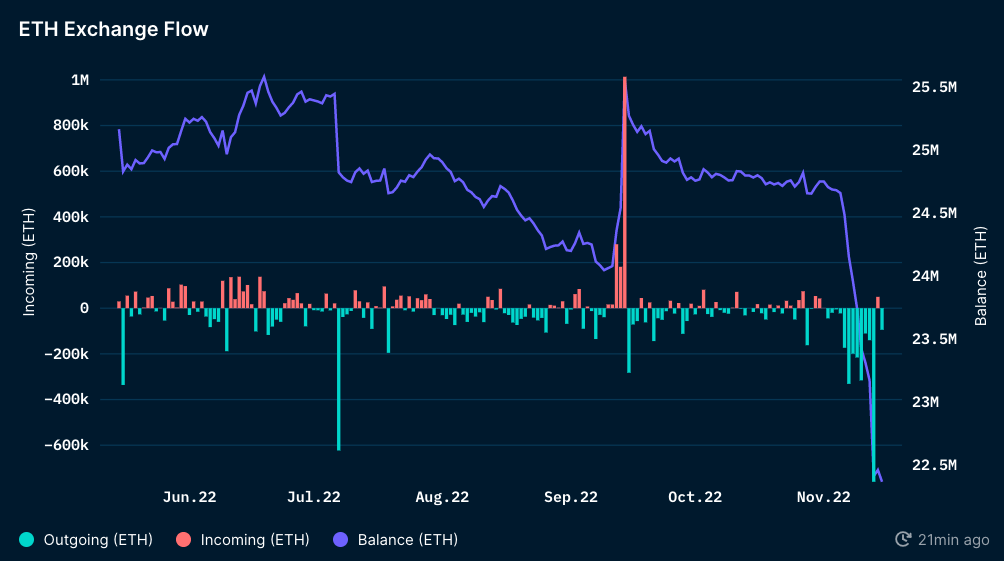 The above graph depicts the people taking ETH off exchanges, withdrawing the asset to their own wallets. The amount of ETH going to exchanges went negative in the past week.

What makes the value of cold wallets rise?

“It is still safe to put huge sums of funds in a hardware wallet; the only concern that remains is if these wallets are physically lost to attackers,” according to Charles Guillemet, Chief Technical Officer at Ledger.

Although cold wallets are thought to be safer than hot wallets, there are still some security concerns. The use of pincode hacking, side-channel attacks, and power outages may be among the more sophisticated methods of attack.

Shapeshift, a provider of cold wallets, reportedly told Micky News, a news media outlet, that they have already taken steps to reduce the risk of PIN code hacking. A firmware update for its KeepKey wallet has been made in order to increase hardware security.

Hopefully no one needs to hear this, but someone probably does:

Get your assets off exchanges, get a hardware wallet, embrace self custody.

The contagion is still spreading, don’t get caught with assets on a centralized service right now there is no good reason to do so.— Jon ShapeShift (@ShapeShiftCOO) November 16, 2022

As per the recent reports from the new CEO of FTX, John Ray, the bankrupt crypto exchange has already moved to a cold wallet custodian, as informed by the company’s general counsel, Ryne Miller, on Twitter. On June 13, the international cryptocurrency lender, Celsius, halted all withdrawals from its network, freezing $12 billion in investor funds. “Today we are announcing that Celsius is halting all withdrawals, swaps, and account transfers due to the harsh market conditions, we are taking this action today to put Celsius in a better position to honour its withdrawal obligations over time,” an official statement stated. But Indian exchanges are allowing users to transfer their crypto to cold wallets even if withdrawals are frozen given the current scenario at present.

1/ Statement from John Ray, Chief Restructuring Officer and CEO of @FTX_Official — Consistent with their obligations as Chapter 11 Debtors-in-Possession, FTX US and FTX [dot] com continue to make every effort to secure all assets, wherever located.— Ryne Miller (@_Ryne_Miller) November 12, 2022


Read More: Billions lost yet the FTX collapse has been profitable for this sector

Ethereum whales scoop up the altcoin as ETH price hits the $1,200 level

How To Buy Terra (Luna) In Australia